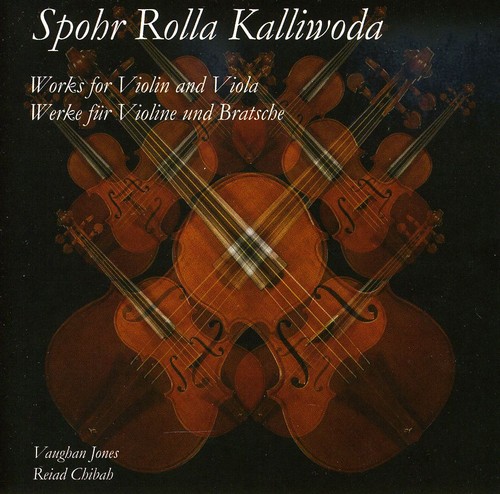 This recording is a selection of pieces by three Violinist Composers. Although all were popular in their day, their works have fallen out of fashion somewhat and deserve to be heard again. There are some strong similarities between the three men. Spohr, Rolla and Kalliwoda were highly prolific composers - they were all violinists who conducted and held senior orchestral posts. Ludwig Spohr (known outside Germany as Louis Spohr) was an eminent violinist in his day, whose sweetness of tone was admired throughout Europe and whose career as a perfomer was only eclipsed by the dazzling innovations of Niccolo Paganini. Alessandro Rolla wrote over 500 works, including many pieces that were important in the development of Violin and Viola technique, using rapid chromatic passages as well as flying staccato and left hand pizzicato. Johann Wenzel Kalliwoda composed over 250 works or series of works, including an opera, seven symphonies, concertos, sacred music, and a commission for the inaugural concert of the New York Philharmonic Society in 1842. Like Kalliwoda, Spohr went far outside the normal sphere of violinist composers, writing chamber music, concertos, symphonies, an oratorio and opera. Perhaps Rolla is most famous nowadays as the one time teacher of Paganini (the two are rumoured to have also played in a quartet together) and as leader of the La Scala Orchestra in Milan where he conducted the first Milanese performances of operas by Mozart, Rossini, Donizetti and Bellini. Kalliwoda was deeply admired by Robert Schumann who dedicated a number of works to him and appeared as a piano soloist with Kalliwoda conducting in a Munich performance. Of the three composers featured on this disc, perhaps the reputation and popularity of Spohr has remained highest with his Octet and Nonet a regular part of the chamber music repertoire. All three composers toured extensively in their day as celebrated violinists, performing to large audiences throughout Europe. The three shared a mastery of counterpoint, often using surprising harmonies which guide their works into interesting realms. All three pieces on the CD have been chosen because they share a common theme - although written for two instruments, they capture a far fuller sound - by virtuosic use of 'double stopping' and challenging harmonies, they convey the performance and expressive power of a larger ensemble. Louis Spohr uses very tight motif's which he interweaves between heartfelt and densely written, intricate passagework. Alessandro Rolla had the artistic intention of reducing the concertante performance to two instruments, while retaining maximum impact, and Johan Kalliwoda expanded this even further to produce something akin to a symphonic work (complete with Scherzo and an almost operatic finale) - producing a powerful and rich sound for two stringed instruments which goes far outside the normal realm of chamber music. So frequently in chamber music, the viola takes a more supporting role to the violin but in the three works on this disc, it is very much on an equal footing - beautifully demonstrating it's own expressive power The Musicians Vaughan Jones was born in 1970 and began playing the violin at the age of 8, studying privately with David Gregory before going onto the Birmingham Conservatoire and Royal College of Music. After leaving college and working as an orchestral musician, he began to concentrate more on chamber music - in particular exploring lesser known works for strings. Vaughan continues his studies with Hungarian violinist Kato Havas O.B.E to whom he is greatly endebted for her wisdom, humour and liberating approach to music. Vaughan plays on a modern instrument made by luthier Martin McClean from Moneymore in Northern Ireland. Reiad Chibah was born in 1972 and attended the Purcell School and the Royal College of Music where he won all the undergraduate viola prizes and string chamber music prizes. On graduating, Reaid was awarded the Constant and Kit Lambert prize - the colleges major award for ensemble playing. He later travelled to Jerusalem for lessons at the Rubin Academy of Music with Maya Glitzarova. Reiad has performed and recorded with many orchestras and chamber ensembles and is passionate about exploring new repertoire. Reiad plays a modern viola by the Polish maker Jan Bobak Both musicians share a passion for exploring repertoire for strings. They have been playing together for approximately three years as a duo and in a quartet. Reiad and Vaughan have developed a mutual understanding of the subtle interplay between the two instruments.